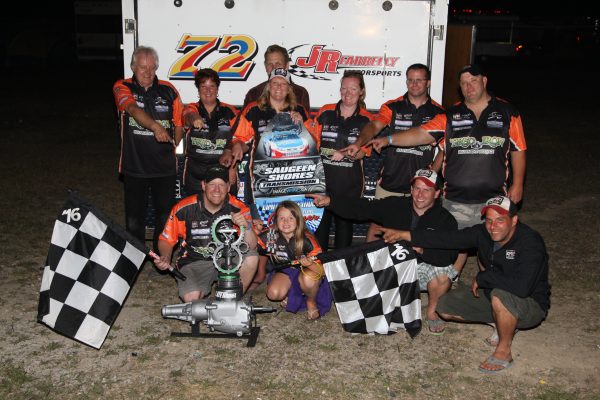 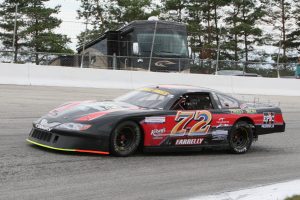 Farrelly was running 4th with two to go when he made his move under Marvin Freiburger and edged slightly ahead by a nose as the field took the white flag.  Contact coming out of corner two sent leaders Josh Stade and Tim Ellis up into the outside wall halfway down the backstretch and enabled Farrelly to get a run going into corner three.  As Stade’s car continued to rim ride the wall Ellis came down in front of Farrelly who had already committed to the bottom and made contact with Ellis sending him spinning in the middle of three and four.  The race was immediately red flagged to ensure Stade and spectators along the backstretch wall where he had climbed the fence were all ok. 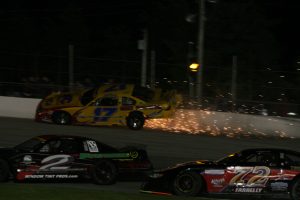 Race officials went back a lap and awarded the victory to Marvin Freiburger originally based on transponder data.  Video evidence and transponder complications later proved that Farrelly had taken the white flag just ahead of Freiburger and the decision was reversed and he was awarded the victory later on in tech. A relieved Farrelly was ecstatic with the turn of events and felt the track made the right call in the end.

“I can’t begin to describe how complicated the end of the race was with everything that went on during the final two laps.  I felt that we beat Marvin to the line for the white flag and was pretty worked up to say the least when they called him to victory lane.  I am glad that the track officials took the time to analyze the data and that we had just installed an in car Go-Pro which played a large role in solidifying my claim.  I am also thankful that both Josh and all of the spectators along the fence weren’t injured in that wreck as he took one scary looking ride along the back stretch and corner 3 walls.”

Farrelly was disappointed that such a marquee event for the track and limited late model division was overshadowed by controversy and a lot of frustrated fans, crew members and drivers alike.

“I hope that people look at the actual on track racing action and don’t let their opinions of the speedway and division get swayed by the off track issues that went on tonight.  People should be thankful for the hard work and sacrifice that the speedway, Marvin Ella of Saugeen Shores Transmission, Scott McTeer of McTeer Automotive in Kincardine and Jason Legge put forth to make this event possible and draw some of the best limited late models around the province that this track has seen in many years.”

As for where this victory ranks amongst Farrelly’s accomplishments throughout his racing career?

“It has to rank right up there with our ALSTAR victory at Sunset due to the caliber of cars and drivers that showed up for this invitational.  We qualified poorly on sticker tires then got put to the back for stopping to avoid a wreck in front of us which forced us to rally from 19th which made the victory extra special.  I cannot thank my wife Erin, entire family who all travelled here to watch this race, all of my dedicated crew and sponsors for making this possible.” 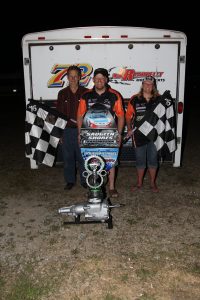 The team returns to action on Saturday, August 20th for the next round of points racing for the Late Model division at Sauble Speedway. For more information visit www.saublespeedway.ca.