Tuesday April 11, 2017 (Guelph, Ontario) – Junior Farrelly Motorsports is excited to announce that Ohsweken Speedway has signed on as a marketing partner for the entire 2017 season competing in the highly competitive APC United Late Model Championship Series.

The 2017 season marks the third year for the APC Series which is touted as the premier late model series in Ontario and will be the first in competition for the Guelph, Ontario veteran.  The entire team has been working relentlessly at ramping up their program during the offseason including their marketing efforts in order to prepare their newly acquired Pro Late Model against some of the toughest competition in Canadian asphalt racing.

The opportunity to partner with Ohsweken Speedway which is widely regarded as one of the most successful and professionally run short tracks in North America is something that Farrelly is grateful for and excited to represent during the 2017 season.  “Let’s face it, Ohsweken Speedway sets the benchmark for short track racing facilities.  The effort that owner Glenn Styres and general manager Clinton Geoffrey and their staff put forth to improve the speedway on an annual basis is unlike anything seen before.  They are always looking for ways to improve the overall fan experience and on track racing action for the competitors and it is truly an honor to represent their facility for the 2017 season.” 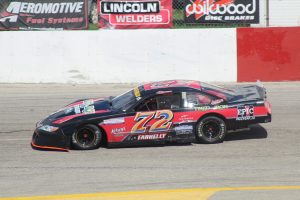 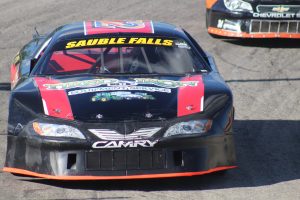 One of the main partnership objectives is to cross promote between the dirt and asphalt communities to heighten both awareness and interest in each others unique racing disciplines.   “Our goal is to bring as many new fans to Ohsweken Speedway who have never experienced dirt racing before and draw on the track’s current fan base to introduce them to our current marketing partners and showcase what the APC United Late Model Series has to offer as well.  We will be working closely with Ohsweken throughout the year to promote their weekly program and special events through our social media accounts and website so stay tuned and engaged for special ticket and promotional contests and prize pack giveaways.”

Farrelly plans on competing in the entire 10 race APC Series with 9 stops at 6 different tracks across Ontario including Sunset, Flamboro, Peterborough, Delaware, Sauble and the newly restored Jukasa Motor Speedway (formerly Cayuga Speedway).  All of the APC races use time trials to set the field for their 100 lap main events with exception of the Jukasa event that will run twin 75 lap features.  Farrelly is also planning on competing in his spare time again at Sauble Speedway in his limited late model which is a 6 race championship battle and will conclude his season at the Velocity 250 weekend at Sunset Speedway.

The team returns to action on Saturday, May 27th for the opening round of the APC Championship Series at Sunset Speedway.  To learn more about advertising opportunities and promotional events with Junior Farrelly Motorsports please email the team at jrfarrelly@hotmail.com or call (519) 835-7205.

The Ohsweken Speedway is a 3/8 mile dirt track in the village of Ohsweken, Ontario, Canada. Ohsweken’s weekly Friday night racing program runs from May to September each year, featuring Sprint Cars, Thunder Stocks, Mini Stocks, and Bombers, while the season finishes each year with the annual Canadian Sprint Car Nationals. Ohsweken Speedway also hosts weekly Micro Sprint racing on Thursday nights, and has been a yearly stop on the World of Outlaws Sprint Car Series schedule since 2007