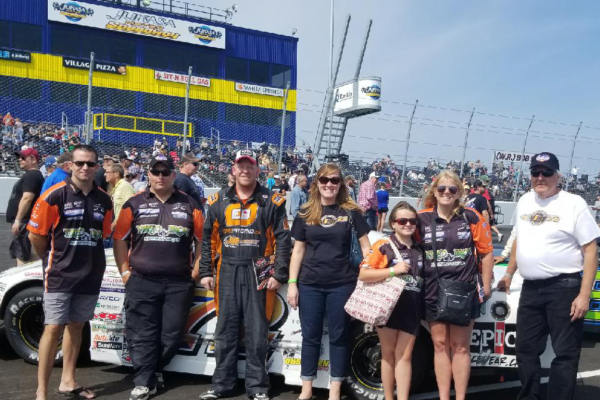 For Farrelly it was the first time competing at Jukasa Motor Speedway (formerly known as Cayuga Speedway) which was recently overhauled and brought back to life by new owners Ken Hill and Jerry Montour who hired Alex Nagy as their general manager responsible for putting Canada’s Crown Jewel racing facility back on the map.

The event did not disappoint as 39 APC Late Models and 22 Outlaw Super Late Models showed up to race in front of a capacity crowd reminiscent of ASA shows featuring North America’s best stock car drivers such as Dale Earnhardt Sr, Bobby Allison, Darrell Waltrip, Dick Trickle, Mark Martin, Alan Kulwicki and Canada’s own Junior Hanley from years past during the tracks glory days. 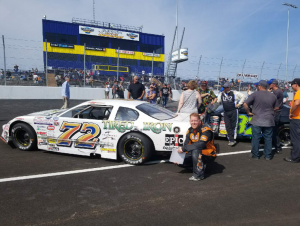 After Saturday’s practice and qualifying sessions Farrelly found himself 17th fastest out of the 39 car field which locked him into the show Sunday without having to run the last chance qualifier.  On Sunday during the first half of the race Farrelly settled in and chose to ride out around his 17th starting position and waited to see how anxious the pack was going to get in the opening laps of this much anticipated event.  After the first couple of cautions nearing the halfway mark of the race Farrelly began to charge forward and worked his way up to the 11th position when a late race caution came out on lap 70.  The restart saw Farrelly battling hard for a top ten finish but unfortunately he got caught up on the outside lane and slipped back to the 14th finishing position at race end. Although disappointed that he lost 3 spots near the end of the race Farrelly was satisfied with a respectable showing in one of strongest field of late model competitors assembled in recent years.

The starting grid for the second 75 lap feature was set by the fastest lap times turned in the opening race which put Farrelly back in the 17th starting position again.  Farrelly was comfortable with the changes the crew had made in between races to loosen his car up and was determined to go on the attack right from the drop of the green flag.  Farrelly narrowly missed a lap two incident involving many strong front runners including former Nascar star Kenny Schrader and found himself restarting in the 14th position after the extended red flag caution.  Farrelly would take advantage of multiple outside line restarts to work his away around the top side of his competitors and into the top ten by the halfway mark.  Farrelly continued to work his way forward and had a spirited battle for a top 5 position with Brandon Watson, Cayden and Treyton Lapcevich and Jesse Kennedy which ultimately saw Farrelly cross the line narrowly beating out Kennedy for his APC career best 7th place finish.

After the teams 7th place result Junior Farrelly currently sits 11th in the series points standings just two points out of the top ten.  The team returns to action this Saturday September 2nd with their Limited Late Model program for the championship final of the Late Model 360 Series at Sauble Speedway.  Farrelly currently sits fourth in the championship standings just three points out of second and 8 out of the lead.  The  team returns to APC United Late Model Series action for the championship final at Delaware Speedway on Saturday September 16th.