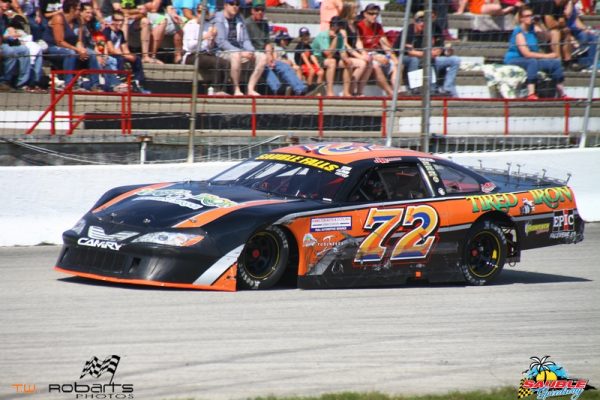 Friday September 1, 2017 (Guelph, Ontario) – Junior Farrelly Motorsports is primed and ready to return to action with their limited late model program this weekend for Sauble Speedway’s end of season championship races.  Sauble Speedway is one of Junior Farrelly’s favorite tracks to compete on however the last time out at the Battle of the Beach Invitational 75 Farrelly sustained heavy damage to both the front and rear of his Tired Iron Equipment Services Camry which has forced the team to rebuild the entire car in preparation for this Saturday’s twin 35 lap features.

Farrelly has remained focused at the task at hand and avoids dwelling on the events that led to his early departure from the tracks marquee event.  “There is no sense worrying about things we cannot change as unfortunately we were in the wrong place at the wrong time and ended up getting caught up in one of the hardest wrecks I’ve ever been involved in.  The important thing is that nobody got hurt and we still were able to salvage the front clip on the car (minus our Hamilton and Auto Cooling radiator, air box, carburetor and distributor) as initially we thought both the front and rear would need to be replaced.  The accident has forced us to go over every part on the car which may in fact be a blessing in disguise as we have found some things that required some level up along the way.”

The team currently sits fourth in the championship standings just one point out of third, three out of second and 8 off the lead held by multi time Sauble champion Jason Parker.  With the top four drivers separated by a mere 8 points it is anybody’s game to win and Farrelly is well aware of what he needs to do in order to advance in the standings.  “The points are definitely tight and it certainly makes you recount some lost points along the way but everyone is in the same boat with missed opportunities throughout the year.  For us being the furthest back our goal is pretty straight forward as we need to try and push for wins in both races to gain the extra two points for the victories and then hope that the other competitors alternate their finishes so nobody gains points on one another.  It is a tall task and definitely a stretch from where we sit but it is still achievable and we won’t give up the fight until we are mathematically eliminated.”

Saturday’s schedule has the pits opening at 3:00pm with the grandstands at 4:00pm and racing action beginning at 6:00pm.  Be sure to bring your family and friends as it is sure to be an exciting night of racing action with all divisions crowning their champions along with the crowd favorite Can-Am Midgets joining in on the action as well.