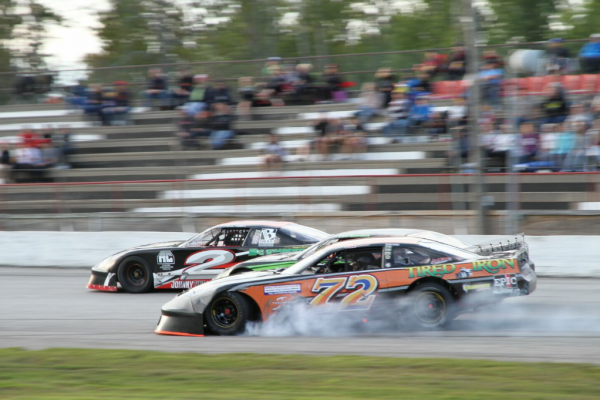 Monday September 4, 2017 (Guelph, Ontario) –  Junior Farrelly entered Sauble Speedway’s end of season championship night in fourth position a mere 8 points behind leader Jason Parker and was looking for two strong finishes in the twin 35 lap races to close the gap and advance in the standings.  Although Junior finished second in the first 35 lap feature and gained ground on Parker, his chances of moving up in the championship standings were eliminated as the result of early race contact that cracked the oil pan and took him out of contention during the second feature of the night.

The first feature saw Farrelly starting from the fifth position with Parker and second place points contender Josh Stade starting on the front row.  Farrelly patiently waited behind a battle between Tim Ellis and Tim Gordon before making his move underneath both competitors exiting turn 4 on lap two.  Unfortunately for Farrelly the 77 of Gordon was unable to maintain his position and made contact with the 2 of Ellis sending him abruptly into the side of Farrelly’s Tired Iron Equipment Services machine which was forced into the infield grass.  Farrelly was able to save his car without spinning and re-entered the track in the middle of 1 and 2 just ahead of Tom Gibbons.  As Farrelly entered turn 3 with debris on his tires from the grass Gibbons looked to the high side and Farrelly slid up into him cutting his left front tire down which brought out the races first caution. 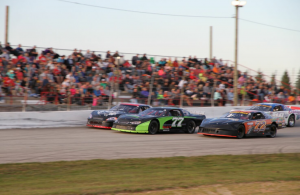 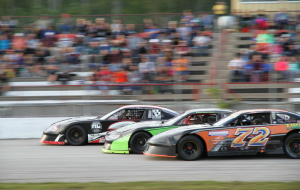 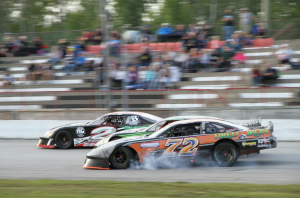 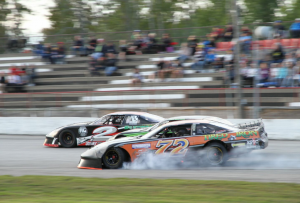 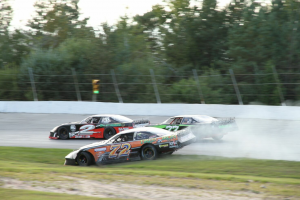 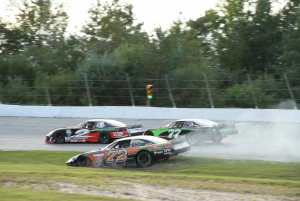 Farrelly was observably upset with the 77 of Gordon for not holding his line for the second straight race as the two had crashed out of the August 6th Battle of the Beach 75 with both cars sustaining heavy damage.  Farrelly also knew that his contact with Gibbons, though unintentional was also the second time they had come together in recent weeks and would most likely result in some retaliation if the opportunity presented itself to Gibbons later in the race.

When the race resumed Farrelly worked his way past Gordon and Marvin Freiburger and found himself in the fourth position behind a heated battle between Ellis and Parker for the second spot with Stade leading the way.  Shortly after Farrelly’s Sauble Beach Motorsports car started suffering handling issues and was caught by Gibbons entering turn three who wasted no time returning the favor, vented his frustration and spun Farrelly out of the way.  Farrelly accepted the retaliation and lined up for the restart focused on moving back up through the field.  Farrelly did just that moving past Gibbons, Gordon and Freiburger and with the laps closing down Ellis made contact with the back of Parker going into turn three and the two spun around backwards directly in front of Farrelly who managed to get on the brakes hard, wait for both of them to spin in opposite directions and split the middle of them avoiding any contact.  Farrelly would line up to Stade’s outside on the ensuing restart but would again slip up the track allowing Stade to go unchallenged to victory as Farrelly held off Parker and Gibbons for the runner up position and advance into third in points heading into the final feature event. 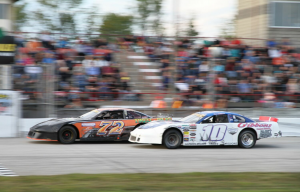 The team was challenged in between races to make multiple wheel changes and repair extensive body damage to both rear sides of their Hamilton Auto & Cooling mount after multiple incidents with Gordon and Gibbons.  The starting order for the second feature was heads up based on points which saw Farrelly starting third alongside Gibbons in fourth with Parker and Stade making up the front row.   As the two leaders waged a fierce battle for the lead Farrelly slipped back to the fourth position as Gibbons was able to use the high line to get around Farrelly before the first caution came out. On the restart Farrelly worked the outside lane in similar fashion to Gibbons and was in the midst of clearing him for third position when his car started to skate across the track losing all forward bite and momentum.  Gibbons would take over the third spot with Freiburger and Ellis following suit past a sliding Farrelly who thought he was experiencing brake issues and frantically adjusted his bias from front to rear and back again in an attempt to regain his handling.  However it was not to be on this night and Farrelly would eventually finish in the sixth position behind Parker who outdueled Frieburger to the line followed by Gibbons, Stade and Ellis.

Upon completion of the race Farrelly thoroughly inspected his Toolneeds Inc limited late model and discovered that the entire underside of the car was covered in oil.  Further investigation led to the source of the oil which came from a cracked oil pan from earlier contact with Gordon that bottomed the engine out in the infield grass and caught the lip of the track surface when re-entering the speedway.  Although disappointed Farrelly was relieved to find the source of his ill-handling race car and satisfied with his fourth place result in the championship. 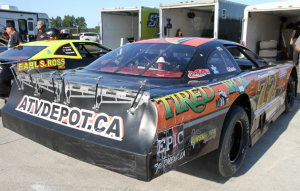 Junior Farrelly Motorsports would like to congratulate Jason Parker on his fifth Sauble Speedway Limited Late Model championship as well as all other competitors who made racing at The Beach this season memorable.  The team would also like to extend their appreciation to owners Paul Gresel and Mark Dilley for stepping up to the plate and purchasing the speedway at the last minute and doing everything in their power to make 2017 a successful season for all fans, drivers and teams alike.  We are confident that they will continue to improve the facility and grow the car counts in all divisions to make Sauble Speedway one of the best weekly racing programs in Ontario.

Junior Farrelly Motorsports returns to action on Saturday September 16th for the APC United Late Model Series championship final in the Great Canadian 100 at Delaware Speedway located just west of London Ontario.  The APC series is joined by the Super Stocks, Trucks, V8 Stocks and Bone Stocks with the pit gate opening at 10 am, spectator grandstands at 1 pm and racing at 3 pm.  It will be an exciting culmination to the 2017 season and a great event to bring your family and friends to show your support for local short track racing.