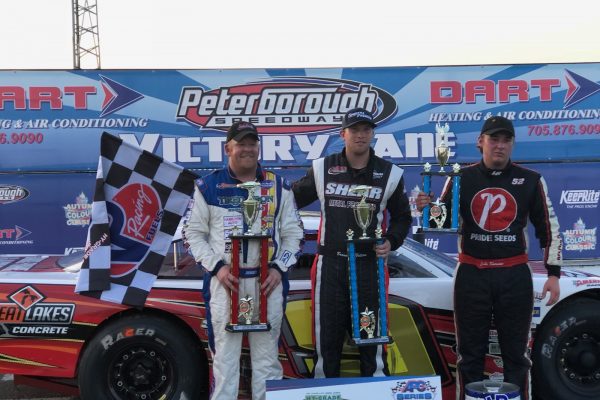 Monday June 18, 2018 (Guelph, Ontario) – Junior Farrelly Motorsports competed in the 3rd round of the APC United Late Model Series at Peterborough Speedway in the Hy-Grade Roofing 100 on Saturday night in front of a capacity crowd where the team scored a career best 2nd place finish.

The team showed good speed in practice resulting in the 4th quickest time of the day just 2/100th’s off the fastest lap set by Brandon Watson. However the teams qualifying struggles continued with a 14th place effort as the car had minimal grip and was very loose on initial throttle.

Farrelly paced himself for the first 20 laps riding around the 15th place mark until a series of cautions came out around lap 30 that enabled the Tired Iron Equipment driver to take advantage of multiple inside line starting spots and work his way into the top 10.  By the time the race was halfway Farrelly had worked into the top 5 and set his sights on the leaders as the McColl Racing Enterprises car was dialed in and charging hard.  Farrelly would eventually work his way passed Rick Burbridge and JR Fitzpatrick to move into second spot and began running down race leader Brandon Watson.  Several long green flag runs were separated by one outside restart opportunity that provided Farrelly with a shot at getting past Watson but the Stayner driver worked lapped traffic to perfection and was able to pull away to 1.6 second gap to win the Hy-Grade 100 on the tough 1/3 mile Peterborough oval.  Farrelly held off an incredible drive from rookie sensation Jake Sheridan to claim the runner up position with Andrew Gresel and JR Fitzpatrick rounding out the top 5. 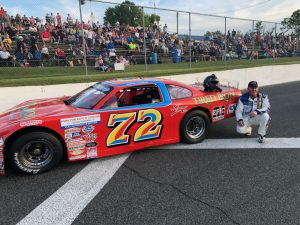 With the strong 2nd place result the team has now moved into third in the championship points standings just 2 points behind Treyton Lapcevich and 22 back from leader JR Fitzpatrick. The series takes a week off and will return to action at Delaware Speedway on Friday June 29th at 7:30pm for their Canada Day celebrations in the Spectra Premium 100.