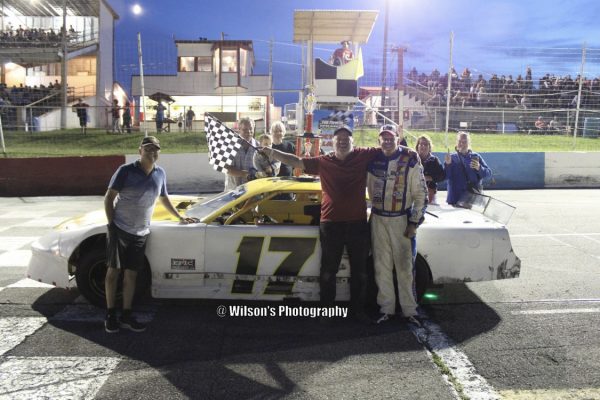 Monday January 2nd, 2023 (Guelph, Ontario) – The 2022 season was originally made up of select APC United Racing Series races only for Junior Farrelly Motorsports but a call in late May from Late Model car owner Ken Gill changed the team’s schedule moving forward.

Farrelly accepted the offer to run Gill’s #17 Pro Late Model at Full Throttle Motor Speedway and make a run for the Late Model championship having only run there one race previously picking up the win in the 2016 Battle of The High Banks Late Model Invitational. There would be some conflicts with the scheduling due to pre-existing commitments, but all parties agreed to have Ken’s kids Jared and Miranda fill in on those nights to maintain the team’s points.

Over the course of the summer there were a total of 8 race nights each with double features contributing to the year end points championship. Junior was able to run the first two nights on June 6th and 18th picking up both feature wins on each night respectively.

Jared would do an amazing job filling in over the next two weeks on July 2nd and 9th capturing 2 feature wins and 2 runner up finishes showing his experience on the Varney high banks where he previously captured the Street Stock championship along with multiple feature victories.

On July 23rd Farrelly was back behind the wheel and picked up the teams sixth feature victory of the season followed up with a runner up finish to Norm Stoddard in the second feature.

The July long weekend saw Miranda Gill make her lone appearance of the year on July 30th and she did an incredible job in her Late Model debut picking up 2 fourth place finishes showing she is plenty capable of wheeling full bodied stock cars around the bullring where she won so many Mini Truck features over the years.

Farrelly would get back behind the wheel the following night for a rare United 8 start at Sauble Speedway. He would start 18th after breaking out in his heat and carved his way up to the third position in contention for the $5000 winner’s purse before getting dumped on a restart just past the halfway point. The car would experience overheating issues and forced to retire in 10th position before races end.

After surveying the motor closely back in the shop the team deemed it necessary to replace it before the upcoming races back at Full Throttle on August 20th. All the hard work paid off as Farrelly was able to pick up victories in the final four features of the season which secured him and Gill the 2022 Late Model track championship.

Junior would like to thank Ken and Gwyn Gill and the entire Gill family for their support in the 2022 season. There were many nights where the team overcame adversity with issues in warmups which required serious repairs to the chassis and motor which wouldn’t have been possible without the efforts of the crew Ken Gill and Barry Hauck. And of course a special thanks to both Jared and Miranda for their strong showings when filling in to maintain the team’s lead in the points.

Ken accepted the championship trophy for the team at the year-end awards presentation as Junior was in Phoenix for the Nascar Championship weekend. The pair are planning on teaming up again for the upcoming 2023 season with upgrades currently underway on the chassis in an effort to find more speed to help defend their title at Full Throttle Motor Speedway.

If you’re interested in becoming a partner with the team for the 2023 season please reach out via email to jrfarrelly@hotmail.com as we have a range of marketing opportunities to tailor to your specific business to help achieve your personal objectives.