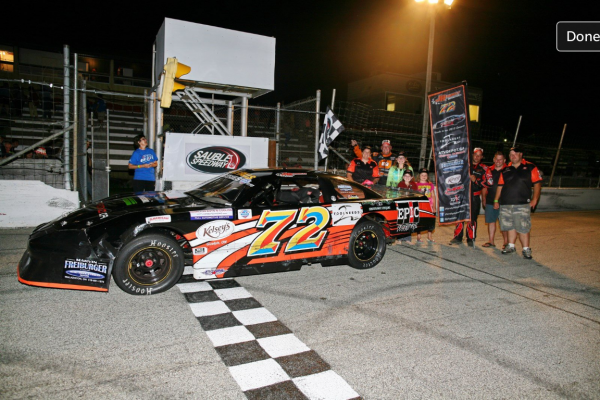 Monday, August 17, 2015 (Guelph, Ontario) – Junior Farrelly has knocked on the door to Sauble Speedway victory lane a number of times, on Saturday, August 15th he was finally invited in. Farrelly started on the outside of the front row in the caution-free feature and led all 35 laps on his way to the win.

“We have been knocking on the door all year with a couple 2nd and 3rd place finishes” said Farrelly. “It is definitely a huge weight off my shoulders to finally get the job done and actually win one of these races at Sauble. I spent a lot of time at this speedway as a kid and my parents live up here now so it is almost like my home track, even though we have to make the 2 hour trip each week to compete” he added.

A crash early in the season created a struggle for Farrelly and his team. After the win he gave credit to Mike McColl and Tom Walters for the turnaround. “I have to thank Mike and Tom for coming up to the Dash for Cash and helping us with the set up.  We missed it for the feature that night as the track tightened up more than we anticipated, but that was a big turning point for us and provided us with a good baseline to build from.”

The relationship with McColl’s has allowed Farrelly to remain competitive despite running an older chassis. “This car was originally built in 1999 and I bought it from Mike back in 2003. The main portion of the chassis is quite old now, but we keep updating the suspension and trying to keep up with the newer technology.  Both Mike and Burt have always gone out of their way to help me with setup advice and that is truly the reason we ended up in victory lane tonight.”

Farrelly was also very appreciative of the many supporters who helped him capture the win. “I have to thank all of my partners who have come on board this season and believe in this team.  Dan and Bob Bailey from EPIC Racewear by OnePromo.ca of Hanover, Len Beauparlant from Toolneeds.com of St. Catharines, Nuru Khamis from Kelsey’s of Guelph, Dan Mead of atvdepot.ca housed just outside the speedway at Sauble Beach Motorsports, Chris and Jenn Becker owners of Tired Iron Equipment Service of Woodstock,  Paul and Steve Jeffery at Hamilton Auto and Cooling, and Marvin and Angela from Freiburger & Sons Inc Heavy Truck and Trailer Repairs of Walkerton. Without all of their support this would not be possible and I cannot thank them enough for all they do and look forward to working with them for years to come.”

“I also want to thank my family and especially my wife Erin for allowing me to dedicate all the time that it requires to field a competitive car week in and week out.  I have some of the most reliable crew around and appreciate all of their hard work and sacrifices throughout the summer months as well.”

The team returns to action on Saturday, August 29th for the next round of points racing for the Late Model division at Sauble Speedway. For more information visit www.saublespeedway.ca.