Successful Season Has Farrelly Fired Up For 2016 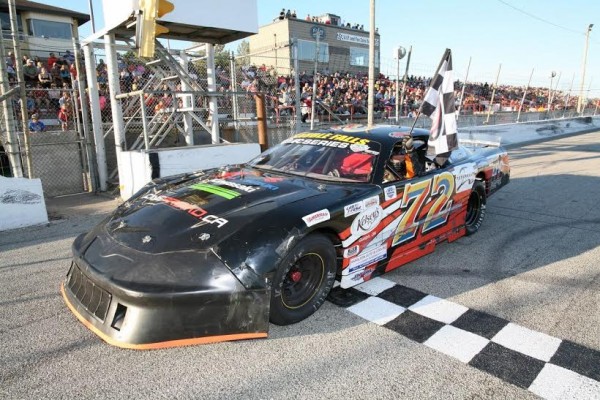 Tuesday, October 27th, 2015 (Guelph, Ontario) – The racing season may be over, but for Junior Farrelly the work never ends. After a successful season at Sauble Speedway the Guelph, Ontario driver is already busy putting the pieces together for his 2016 program.

A victory at Sauble on August 15th combined with a third place finish in the Late Model division standings was exactly what Farrelly needed to regain the passion and excitement for racing. While his own confidence received a boost from the strong performances he stayed grounded by the fact that it was a combined effort that brought success.

“We stepped up our program this year with the help of many great supporters including family, friends, crew and sponsors and were in the championship battle until the very end” said Farrelly. “I am very proud of our efforts and the many relationships we developed with our partners, fans and fellow competitors throughout the course of the season”.

Finding the enjoyment of the sport once again has given Farrelly the incentive and determination to have an even stronger year in 2016. “Racing truly became fun again and I looked forward to getting to the racetrack each and every week” he said.  “I look forward to expanding our program next year to include a full time effort at Sauble Speedway in an attempt to battle for the championship again as well as attending other special events or even APC Series races if sponsorship prevails” he added.

While Farrelly is focused on the task at hand for next season, he is well aware of who has gotten him to this point in his racing career. “I have to thank all of my partners who were part of such a successful season.  Dan and Bob Bailey from EPIC Racewear by OnePromo.ca of Hanover, Len Beauparlant from Toolneeds.com of St. Catharines, Nuru Khamis from Kelsey’s of Guelph, Dan Mead of atvdepot.ca housed just outside the speedway at Sauble Beach Motorsports, Chris and Jenn Becker owners of Tired Iron Equipment Service of Woodstock,  Paul and Steve Jeffery at Hamilton Auto and Cooling, and Marvin and Angela from Freiburger & Sons Inc Heavy Truck and Trailer Repairs of Walkerton. Without all of their support this season would not have been possible and I cannot thank them enough for all they do. I look forward to creating customized brand exposure for each of their companies and developing stronger partnerships over the years to come.”

Part of the enjoyment of heading to the race track is the time he gets to spend with family and friends. “I couldn’t do any of this without the full support of my wife Erin, she believes in my passion for racing and wants to see me succeed in my goals” he said. “I also want to thank my parents Ted and Linda Farrelly, my sister Kerry along with Tim, Alex, as well as Ricky and Tammy for all their hard work at the track‎.” Jason Thom of Sauble Speedway was also a great supporter by allowing the team to host numerous sponsor events at the speedway and receive group rate tickets and suite rentals.

Although on-track action takes a 6 month hiatus while winter invades Ontario, Farrelly is hard at work to build an even more competitive program for next season. With momentum on his side the opportunity for greater success in 2016 is there and could be an excellent avenue for companies to be a part of a contending race team.

For more information on Jr Farrelly Motorsports or for sponsorship opportunities contact Junior Farrelly through the team website at www.jrfarrellymotorsports.com.