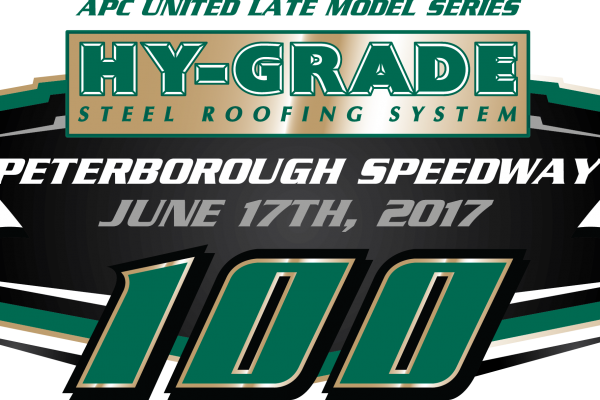 Tuesday June 20, 2017 (Guelph, Ontario) – Junior Farrelly Motorsports returned to Peterborough Speedway this past Saturday for the first time in 13 years to compete in round # 3 of the APC United Late Model Race Series Hy-Grade Roofing 100.  Fuel pick up issues plagued the team in the first two rounds of the series and Farrelly was looking to shake the gremlins and get back into the mix and battle for a top ten run amongst the toughest field of late model drivers in the province.

After a lengthy rain delay washed the regular practice sessions out, speedway and series officials convened to establish a new condensed format that would see one limited practice followed shortly after with 5 laps of qualifying to prepare for the 100 lap main event.  Not having competed at the speedway since the ALSTAR tour Farrelly found himself behind the 8 ball and was forced to learn on the fly.  “We definitely would have benefited from the additional practice sessions as it was only my third race in the new car and I had forgotten just how fast and tricky this place was.”  After qualifying was complete the team found themselves 19th in the 24 car field and just a tenth of a second off the top ten which was respectable under the circumstances. 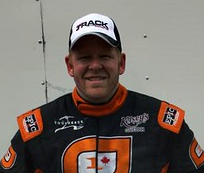 Josh Stade and Brandon Watson paced the field to the green flag and Farrelly managed to avoid a first lap spin by Jamie Cox who was collected while trying to avoid a slowing Stade who’s brake pedal had failed forcing him out of the race.  When racing resumed Farrelly found himself stuck on the outside lane and unable to get back to the bottom of the challenging one groove track.  With race leader Watson setting a torrent pace it wasn’t long before Farrelly found himself battling to avoid going a lap down which he succumbed to the race leaders around the 30 lap mark.  After a caution for JR Fitzpatrick who sustained heavy damage after contacting the turn 3 wall Farrelly was awarded the lucky dog and was able to regroup himself back on the lead lap with about 60 laps remaining.  “We really needed that caution as we were fortunate enough to be in position for the lucky dog.  I was getting a lot more comfortable with the car and found a good rhythm that enabled us to put down some good laps so we felt like we were back in the game with a competitive car capable of moving forward.”

The lap 40 and ensuing restarts provided Farrelly with the opportunity to charge into the top ten with the benefit of starting on the inside line for the majority of restarts.  “The car was really working well on the bottom but I definitely needed the whole track as we were battling a loose off condition as we were struggling with forward bite especially coming off of turn 2.”  On lap 70 Farrelly was running 9th and battling just ahead of  Dwayne Baker and Jamie Cox when he pushed the limits of his Tired Iron Chevy a little too far and made contact and climbed the entire length of the back stretch wall never losing a position as the caution came out at the same time for a slowing Treyton Lapcevich in turn 3.  Although Farrelly maintained his position in the top ten his race was essentially over as the damage from contacting the wall would end his push forward over the remaining 30 laps.  “After we hit the wall for the second time I knew we were done as the steering wheel shifted a mile and we towed the car in badly.  We started on the outside on the next restart and could never get back down to the bottom until we were able to slide into the 15th position behind Jason Parker and Tom Gibbons where we ultimately rode out the laps till the end of the race.”

Although disappointed with the finishing result the team can still find the positives from this race and looks forward to the next series race on Canada Day July 1st at Delaware Speedway.  “It takes a lot of sacrifice and effort to compete with this series and we wouldn’t be able to without the support from our crew and sponsors.  It is truly the toughest field of competitors I have ever raced against and definitely been an eye opening experience during the first three rounds.  I cannot thank all of my sponsors Tired Iron Equipment Services, Hamilton Auto and Cooling, Sauble Beach Motorsports / atvdepot.ca, Toolneeds Inc, EPIC Racewear, Ohsweken Speedway and Kelsey’s of Guelph enough for all their commitment to strengthening our program throughout the season.”

After the teams 15th place result Junior Farrelly currently sits 13th in the series points standings just seven points out of the top ten.  The team returns to action this Saturday, June 24th to kick off their Limited Late Model program for the opening round of the Late Model 360 Series at Sauble Speedway.