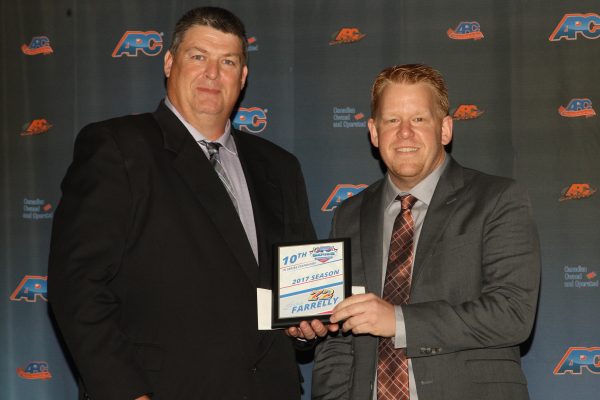 Monday October 23, 2017 (Guelph, Ontario) – The APC United Late Model Series held it’s annual awards banquet this past Saturday night at the Four Points Shearton in London Ontario where Junior Farrelly Motorsports was presented with their hardware for their 10th place finish in the championship points.

This was the third season for the APC Series which drew a next to capacity crowd of 250 attendees representing sponsors, officials, race teams and family to celebrate another successful season of racing across Ontario’s short tracks.  This was Farrelly’s first year competing with the series and was proud of the team’s overall accomplishments and top ten placing amongst a field of highly touted late model drivers.

Farrelly and his team continually improved throughout the year as they learned the ropes of the highly competitive APC Series and worked through some early season adversity with rear end and carburetor issues to gain confidence, find speed in the new car and battle for top 10 results during the second half of the season.  “This season definitely brought mixed results as we had our share of ups and downs but we are truly proud of how we never gave up and battled to achieve a top 10 placing in the overall points.  This series is loaded with the best drivers and equipment in Ontario and you have to have everything 100% in order to run up front and I feel that we were continually making gains all season long and can’t wait to start planning for next year”.

The season was highlighted by the inaugural twin 75 lap races at the newly renovated Jukasa Motor Speedway where Farrelly finished a career high 7th place out of 39 late models who made the trip to Canada’s Crown Jewel racing facility formerly known as Cayuga Motor Speedway.  The team qualified 19th and drove up into the top ten near the end of the first race before getting caught on the outside and finishing 14th.  It was the second feature race though that garnered Farrelly respect amongst his fellow racers as he drove from 17th to 7th and had an incredible battle for a top 5 run with Cayden Lapcevich, Brandon Watson, Treyton Lapcevich and Jesse Kennedy that had the crowd on their feet as the group swapped positions countless times over the closing laps.  Farrelly also placed 10th at his home track of Flamboro Speedway on July 15th and had a very strong run go south with an exhaust issue at Sauble Speedway after qualifying 7th and maintaining his position for the first half of the caution free event before ending up 13th. 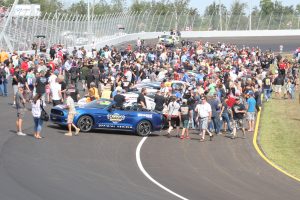 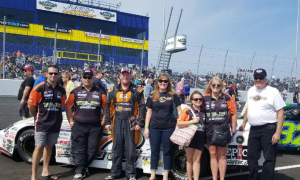 Farrelly was very thankful of all the support he received all season long from his family, crew and sponsors and noted that it wouldn’t be possible without their involvement in the race team.  “We have some of most dedicated people in the business on our race team and I truly wouldn’t be able to compete at this level without them.  I cannot thank my wife Erin for allowing me to dedicate so much time and effort into our program along with Rick and Tammy Leader as well as Steve Laking for all their help all season long at the shop and track along with my father Ted Farrelly, sister Kerry, Tim Pavy, Dave Baker and Chris Rowles.  Of course I would also like to thank all of my marketing partners including Tired Iron Equipment Services, Hamilton Auto and Cooling, Toolneeds Inc, Sauble Beach Motorsports, EPIC Racewear and Ohsweken Speedway for standing behind us all year long”.

Junior Farrelly Motorsports would like to personally congratulate Brandon Watson and the entire McColl Racing Enterprises team on their incredible championship season along with Treyton Lapcevich who earned Rookie of the Year honors and Tom Gibbons who was awarded with the Jamie Ramsay Sportsmanship award.

The team is now busy disassembling their race cars and preparing for another full time season with the APC United Late Model Series in 2018.  Farrelly is quick to note that the level of competition increases each year with the series and the only way to improve is to make sure you are fully prepared and utilize all of your available resources to bring a better piece to the track each week.  Junior Farrelly Motorsports is actively seeking additional sponsorship for the upcoming season and preparing marketing proposals that will assist the team in obtaining the required resources to propel them to a potential top 5 run for the 2018 championship.