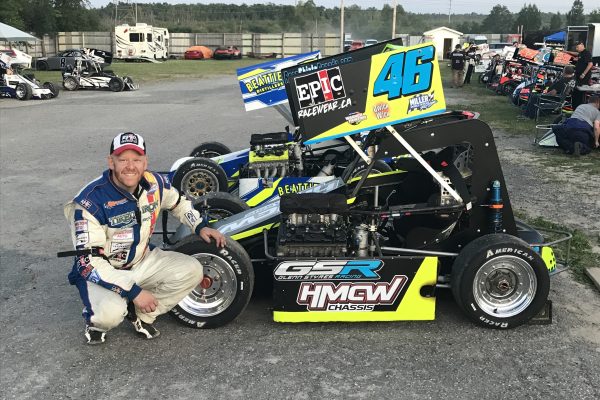 Monday June 27, 2022 (Guelph, Ontario) – The 2022 race season provided Junior Farrelly Motorsports with an opportunity to branch out and try their hand into different racing series including the fan favorite Can-Am Midgets. Farrelly had always had a desire to race with the Can-Am club but previous commitments with his Late Model program ultimately prevented this from becoming a reality.

In early June Farrelly was contacted by his close friend Bob Bailey who asked him if he would be interested in filling in for him for an upcoming race in his Can-Am Midget that he couldn’t attend at Peterborough Speedway. Junior quickly jumped at the chance to get behind the wheel of one of the quickest power-to-weight ratio race cars in Canada and set up a test at Flamboro Speedway the following week.

As excited as Farrelly was about the test and opportunity, he was slightly nervous climbing into the midget at Flamboro which is the fastest track on the circuit. “I would be lying if I told you I didn’t have some reservations about the test” Farrelly said with a smirk. “These cars produce some pretty high speeds at Flamboro and it is always hard to just jump behind the wheel of someone else’s equipment as you are worried about wrecking it on them especially when you haven’t driven this type of vehicle”. The test went off without any issues and Farrelly was able to gain some valuable experience behind the wheel and gained confidence turning lap times that would have put him in contention for the win the last time the series visited the speedway.

On June 23rd Farrelly made the long trip to Peterborough Speedway and finally fulfilled his desire to compete with the Can-Am Midgets. Due to the fact that Farrelly was a rookie he would have to start shot gun on the field in both his heat and feature races that evening. In his heat race Farrelly would drive up to 3rd place and actually be scored 2nd after James Stanley was disqualified for a weigh-in infraction.

In the feature Farrelly would charge from his 14th place starting position to 6th before mistakenly thinking a caution came out when the flagman was signaling lap cars to move down when he was coming around to lap them. “Simply a rookie mistake” stated Farrelly. “The flagman had the yellow flag waving the lap cars down and I took it for a yellow. It was a shame as that cost us two spots and a lot of track position”. The race went green to checkered and Farrelly was able to finish in the top 10 in 8th position which was great for the first time out but that error cost a top 5 finish for sure which left Farrelly appreciative but dejected. “I cannot thank Bob Bailey enough for this opportunity and had an absolute blast driving this TQ midget tonight. I feel we were fast enough to battle with the leaders, but it was tough coming from the back, if you hesitate for a second in these things the field is gone. We were in position for a top 5 but were never able to regain our momentum after that perceived caution. Hopefully we will get an opportunity to come back out and race with these guys in the future, great club and probably the most fun I’ve had in a race car in my life” exclaimed Farrelly with an ear-to-ear grin.